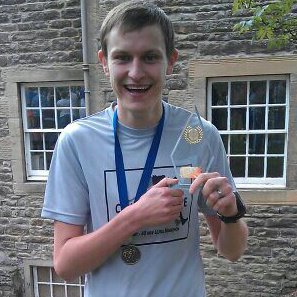 Flying start in 2019 and the Stirling Half Marathon

So I'm back, again.  I don't know if my commitment issues are with running or blogging at this point?

Since my last post I have continued to put one foot in front of the other at speed.  I completed the Glasgow half at the end of last year along with the Strathaven Run with the Wind 10k.  This year, I started off with another Strathaven run, this time the Run with the Wind Half Marathon.  Surprisingly this was the first time I had ran the route, despite having signed up to it several times previously.  The course was a wide loop from Strathaven, uphill to the windfarm and a gradual decent back into Strathaven.  The run brought another first time for me, running with my sister!  Sarah took up running last year and has completely caught the bug!

I've also made another comeback to Strathclyde parkrun.  I have been going to parkrun since 2010.  I was a first timer at event 14 at Strathclyde parkrun when a grand total of 80 runners made it around the 5k route.  The course is now attracting a regular crowd of 300 or more with an attendance record of over 500.  However, despite my on/off 9 year relationship with parkrun, which I can only described as complicated, I have yet to make it to the big 50!  Looking back on some of these previous blog entries I once described the club 50 as 'elite'.  Yet we are now seeing parkrunners regularly completing their 100, 150 and 250th. However, there is nothing worse in the world of running than comparing yourself to others and I am determined to get to 50 in the coming weeks (I'm at 48), and also improve on my time and hopefully get somewhere near that PB of 21.10.  My last run with my friend Stewart we kept a good steady pace and managed a respectable time of 24.05, not far outside Stewart's PB! 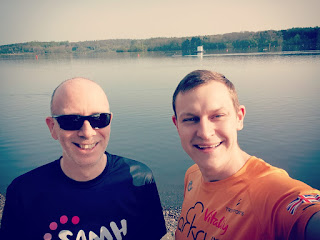 
Last weekend I ventured up to the Stirling Half Marathon.  I had signed up to do the full marathon but I've had some injury troubles over the last few months so I transfered to the half after my wife talked some sense into me.  I also managed to convince my sister to sign up too, not that she needed much convincing.  We made our way up to Stirling for the early 8.30am start. After my sister, Sarah, got over some of her pre-race nerves which hilariously manifested itself into her debating with herself how many jelly babies she should run with, we made our way to the start line.  We hadn't really agreed a pace but I knew that Sarah was keen to get her first sub 2 hour finish.  This being only her second half marathon with her first finish around 2 hours 4 minutes I knew it was achievable on the fairly flat course.

The start was a bit chaotic with no clear marshaling  and most of the participants trying to get out of Kings Park through the gates and barriers around the park.  Those running the full marathon were directed to the left and those doing the half were directed to the right, also a bit of a free for all.  We got there in the end and off we went.

The first 8 miles or so were over fairly effortlessly, even the reported 'hill' at Stirling University was fairly painless.  Sarah was running well and we were about 2 minutes ahead of pace for a sub 2 hour finish.  Mile 9, 10 and 11 were a bit of a slog.  We were running back along the A91 and I think the lack of spectators and the reminder that 13.1 miles is actually quite long had zapped the legs.  I was also sick of the sight of the Wallace Monument at this point.

From mile 11 we were almost back in Stirling and the spectator support gave us the boost we were needing.  We were well within the sub 2 hour time so I knew we had a bit of room to ease the pace if we needed.  The last mile came quickly.  Sarah had a wobble moment and almost stopped but I knew that it was in the head as we were only about 400 metres from the finish.  We managed to keep going and we crossed the line with Sarah getting her PB in 1 hour 56 minutes.  Oh, and Sarah didn't eat the jelly babies until she finished, despite her dilemma before the race!

I have lots of photos of the day but here is one of my favourites. 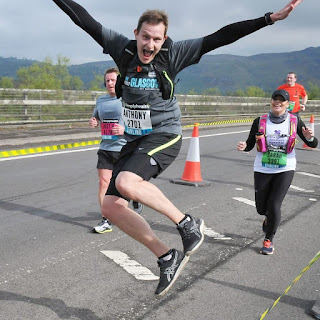 Flying high at the Stirling Half Marathon

So I'm back. I've got the Troon  10k later next week.  I haven't ran it since 2012, you can read about it here.  It is my PB course and always a great race, as long as the weather is kind.  I also have a few other races coming up and I'll try and kep this blog up-to-date.  Not because I think anyone is reading it, more for my own motivation and it's funny to read back on all the previous posts.